“A battery is a small fort designed to receive cannons.” 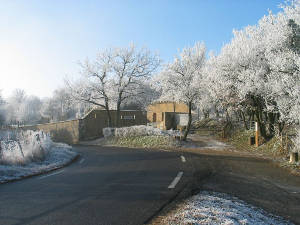 The “batterie des Carrières” is located in the municipality of Limonest, north of the locality named les Roches (hill 553), on the edge of the current departmental road 92 which links Limonest to Poleymieux-au-Mont-d'Or, in the vicinity of the former quarries.

This building belongs to the fortified system running from Dunkirk to Nice, designed after the Franco-Prussian war of 1870-1871.

The new Director of Engineering Services at the Department of War, Raymond Adolphe Séré de Rivières (1815-1895), gave his name to this system.

Launched in 1874, the mission of the “batterie des Carrières” was to overcome the blind spots of the batteries at the Mount Verdun fort and to perform the firing missions that the fort could not fulfil.

The “batterie des Carrières” was decommissioned in 1900, i.e. disarmed and used for storage or for housing transient troops. After the war of 39-45, German prisoners were housed there.

In 2016, following 5 international youth work camps, approximately 15 000 hours of work were carried out.

Limonest Patrimoine intervenes every Thursday morning and can guide you for a short visit from 11 am. 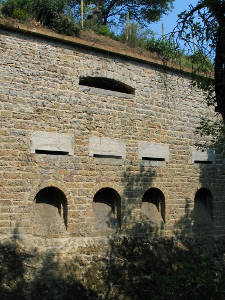 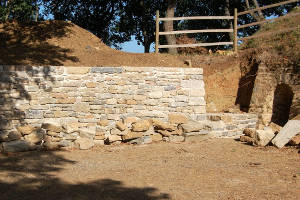 In a closed perimeter, this battery contained a main armament of 6 guns, placed on firing platforms (left photo) that could attack the area between the heights of the Chicotière and the grounds of the Fort du Paillet (see map). The main aim was to restrict roads and railways leading to Lyon.

The bunkers are masses of earth perpendicular to the parapet protecting the gun platform from possible lateral fire, and covering shelters. 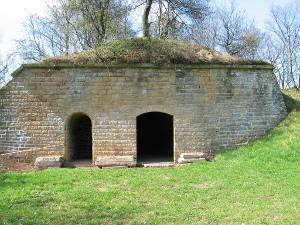 Shelters under the bunkers 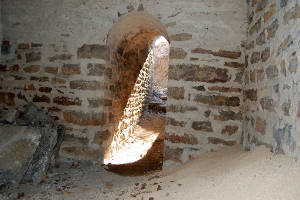 Within the bunkers, vaulted shelters are provided so the soldiers could access the firing platforms through two small lateral galleries, the sleeper shelters. At the “batterie des Carrières” these galleries, closed when the shelters were converted into stores, were reopened by the association.

The sleeper shelters were used both to store equipment and to protect on duty personnel, or as a workshop to prepare ammunition (make propellant pods, fill shells and secure fuses). In addition, in peacetime, two medium-calibre guns could be stored there. 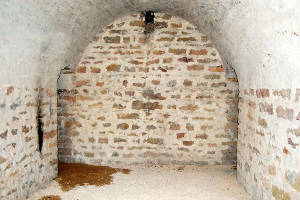 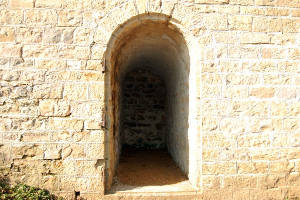 Next to each shelter entrance and on the same wall, a 1 m wide by 3,4 m deep, also vaulted, reduced space formed a small store where security ammunition was stored; about ten complete shots per gun barrel. Powder crates could be stored there for a short period of time because they are vulnerable to humidity.

The view was then clear, because the first servitude zone which surrounds the structure to a depth of 250 m was built with regard to for example ground movements (quarry, road, etc.), vegetation and constructions (fencing with at least 90 % daylight).

The barracks are a defensive measure. Each of the three bunkers is equipped with three horizontal rifle hole posts with foot holes below. The latter allowing grenades to be thrown into the ditch.

The three rifle holes are surmounted by a wide opening to evacuate the fumes and toxic gases resulting from the combustion of the black powder. All the rifle holes control the approaches to the structure from the south.

A crevice dug in the rock under the foot holes creates an access obstacle via the exterior ditch. 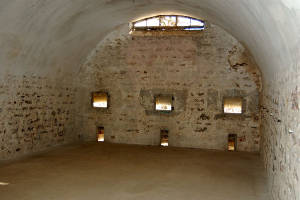 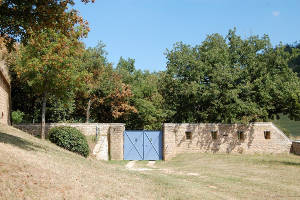 The gorge (entrance to the structure), is accessed from the Chemin de la Glande. It is under the protection of the Mont Verdun fort.

The perimeter is closed by a gate, with 2 vertical sight holes, recently placed based on the model of the fort of Mont Verdun (same contractor during construction).

To the left of the entrance, a defensive position includes a small raised platform with a ledge to shoot over the ditch.

To the right of the entrance, the wall is perforated with 4 vertical rifle holes to defend the northeast corner. In front, the external protection wall is preceded by a small pit therefore increasing the height of the wall.

A 75 metre long wall overlooking the strategic road closes the structure on this side. It is a simple barrier, because on this side, the close defence is provided by the fort of Mont Verdun. On the other hand, to the southeast the wall consists of a protruding ledge which can be used by riflemen. 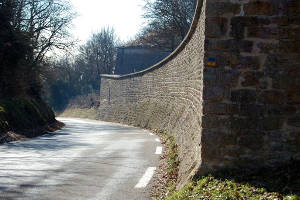 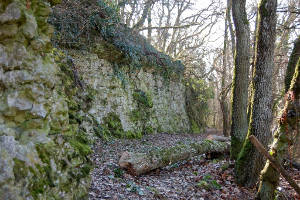 A simple embankment creates the cliff, about 4 to 5 m high, and dominates a steep and, at the time, uneven barrier. This natural environment is equivalent to the obstacles of counterscarpsExternal slope of a ditch located towards the countryside (opposite the embankment). carved on the North and South faces. In the 1890s, in front of the cliff, the addition of barbed wire completed the defence.

No infantry fire station is provided. On this side, defence is essentially ensured by the firing of the cannons, supplemented by the action of riflemen.

One goes from the entrance of the battery to the barracks by a path running along the surrounding wall. The top of this wall forms a parapet providing protection against lateral fire.

A staircase leads directly from the barracks to the central platform. 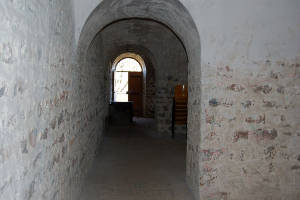 The barracks consists of 3 rectangular vaulted bunkers, each vault has a span of 5 m for a length of 10 m, a wall of approximately 1.2 m thick separates the bunkers. The importance of the walls is explained by the fact that each vault was self-supporting in order to prevent the collapse of one bunker from destroying the others.

The wall structures, assembled with hydraulic limeLime that has the property of hardening under water. mortar, are about 1 m, thick and covered with pebbles to absorb the impact of the projectiles. The chimney of the furnace emerges on the tops of the structure. Was this high point used in peacetime for overall monitoring of the battery and surroundings ? 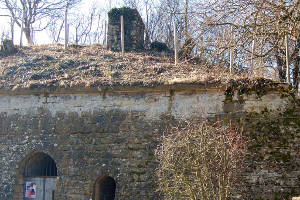 To avoid moisture from above, a layer of clay covers the bunkers which seem never to have been covered with tiles. A lateral cover maintains an air flow that prevents the contact of the 2 embedded walls from soil moisture. The masonry is made of stone from the Monts d'Or quarries. The interior was whitewashed to transmit maximum light and to make the most of the dim light coming from the openings.

The 1st officer lodged in the first bunker as well as probably the 6 under officers, because in addition to controlling the movements, they benefited from the heat of the furnace. This furnace was located on the right just after the front door.

On the other side, when entering along the left wall, the supports of the water tank are still visible ; It was the soldiers task to supply the tanks with water from the outside.

It is in this bunker that the cooking was done and the provisions were stored. There was the bell inside operated from the battery entrance gate.

In each bunker, two metal rings were installed to suspend a breadboardThe bread, delivered in loaves of 1.5 kg, was equivalent to 2 daily rations, hence the expression “1 loaf for two”., to protect it from rodents. Oil lamps were positioned on wooden wall brackets to facilitate their use and daily maintenance.

To access the other bunkers, you have to pass through the first one. A separating door served to isolate the first bunker from the other two. The 32 men were divided into 2 bedrooms of 16. In these bunkers, they took their meals, spent their free time and slept on bunks of 4 beds on 2 levels. A back pack was used to store their individual equipment.

A small construction was later built at the southeast corner of the fortification, just next to the entrance to the barracks. The remaining traces make it possible to identify a room of approximately 18 m² with a roof on a metal structure with a slope supported on the wall of the barracks and on the perimeter of the surrounding wall.

A gun slit at the southeast corner was to allow a shot to be fired onto the road and to the mouth of the ditch. The north wall had a door and window.

The remains of pipe works, washbasins, metal brackets and chimney flues suggest a room built either for military hygiene or for housing a battery guard.

The boundary report of the 4th of December 1894 defines the external military land which forms the area of the fortifications of the “batterie des Carrières” in the municipality of Limonest. This delimitation was notified to the local residents much later because the structure was built between 1874 and 1878 and the project was stopped by the Minister of War on the 7th of March 1892. 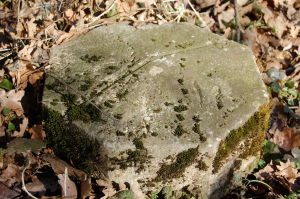 Some of these boundary markers are still visible, they are made of cut stone, octagonal shape ; “the centre of their upper surface indicates the boundary of the district area and, on this side, the number of the marker and two engraved lines leading from the centre towards the direction of the neighbouring markers …” (cf. PV of the LCL Vieillard). These markers are made of hard Villebois limestone with characteristic horizontal fissures called “stylolithes”.

The “batterie des Carrières” seems never to have been fenced off at the boundary of the military site. This is probably due to the existence of the closed defensive perimeter, a unique feature in the Monts d’Or.

The wasteland sold to the municipality of Limonest by the estate authorities on the 28th of December 1983 consists of 8940 m². It corresponds to the original boundary except for the part originally in common with Strategic Road No. 2, where boundary stones 6, 7 and 8 are indicated beneath the road.

To be noted is a curious small triangular landmark (22 cm equilateral sided triangle) to the south of the property border, which does not correspond to any known land division. Did it serve the engineering chiefs to build the fortification ? 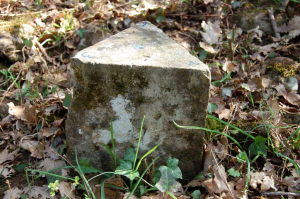 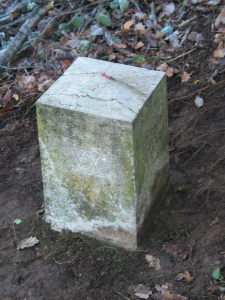 These markers are statutorily square shaped with, on one side, their number in Roman numerals. The slightly pyramidal top also has 2 directional beams.

The 3 boundary limits define areas in which restrictions on land and buildings are established. The elementary homothetic boundary limits of each fortification are combined in function to their respective distances. A thorough search for the markers has made it possible to rediscover most of these networks.

10 of these markers have been located at the “batterie des Carrières”. They are listed below :

* With the kind permission of Colonel Bonijoly, writer and fortification specialist.