To begin this visit in the past of our village, it is necessary to go back to the 11th century, to find trace of the first mention of Limonest in the cartulary of Ainay : “in villa quae vocatur Limonadas”.

There are three hypotheses about the origin of the name Limonest, one can think of the Celtic “limo”, which means elm ; or limonite, iron ore present in the region ; or limonier, wooden bars with which one fastens to a work horse, which alludes to the intense traffic that has always animated the village which has always been passed through as a link road between Lyon and Burgundy, the first dating back to the Romans.

Another interpretation is also possible, Limonest would come from silt, the clay soil that farmers and gardeners know well in the commune. 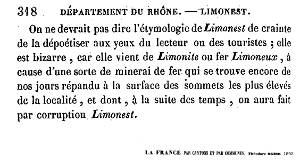 You're just spoiled for choice !

A bit of history

The Romans left us traces. At Le Puy d’Or, a funeral stone was reused in the wall of a farm. The Roman aqueduct of the Mont d'Or may have a branch in Limonest, Master Bolo wrote in 1844 in the Album du Lyonnais : “one of the aqueducts of the Mont d'Or descends from the land of the Barollière” ; what is certain is that another aqueduct, that of the Brévenne, passes through La Bruyère.

The oldest stronghold in Limonest is located at the Domaine du Bois d'Ars, founded according to legend by Saracen chiefs in the 5th century ; its name derives from the Latin word “arsus” meaning burned, alluding to a fire that occurred in the 11th century ; the castle was rebuilt at the end of the 15th century by Etienne d'Ars.

In the Middle Ages, there were two lordships in Limonest, the oldest, the seat of the first parish, was in Saint-André-du-Coing ; its territory extended on both sides of the stream of the same name, now shared between Limonest and Saint Didier, the current castle is at Saint Didier ; this lordship depended on the Lyon Chapter ; the parish church was also originally the chapel of the castle, it still exists at the bottom of the path to Saint-André.

The second lordship was located at the site of Barollière's residence (which only took this name much later). At the time, it was a strong house, which depended on the Archbishop and the Chapter of Lyon and the seneschal’s court of Lyon, but Justice was delegated to the Lord.

The old church in the hamlet of Les Roches was located at the top of the montée des Roches, it was of a Roman style and was demolished in 1850.